HomeMiscellaneousKilleen Police Need Your Help Identifying a...
January 25, 2018 in Miscellaneous 1

Killeen Police Officers responded to a 911 call at approximately 3:40 a.m. in reference to a Robbery at the Mickey’s Convenience Store located at 4808 Westcliff Rd on Sunday, December 24, 2017.  Upon the officers’ arrival, they were told that a black male entered the store, and asked for a tobacco product.  When the clerk opened the cash drawer, the suspect pushed the clerk back and took money from the cash drawer.  The suspect fled eastbound on foot with an undisclosed amount of money.

The suspect is described as a black male in his early 30’s, approximately 5’08” tall, weighing 180 lbs.  He was last seen wearing a beanie, a dark hooded sweatshirt, pajama style pants and blue and white gloves. 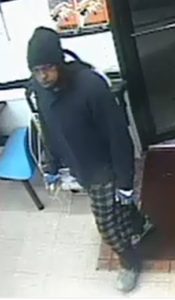 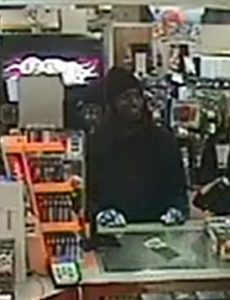 Detectives with the Criminal Investigation Division, Violent Crimes Unit, are asking anyone who has information about this Aggravated Robbery to contact Crime Stoppers at 254-526-TIPS (8477) or go online at www.bellcountycrimestoppers.com.  You can also download the P3Tips App for IOS and Android and give an anonymous tip.  All information given is anonymous and confidential, and if your tip leads to the arrest of the person responsible for this Aggravated Robbery, you could be eligible for reward up to $1,000 in cash.