Do you know who this Killeen robbery suspect is?

HomeCrime NewsDo you know who this Killeen robbery suspect is?
November 4, 2014 in Crime News 1 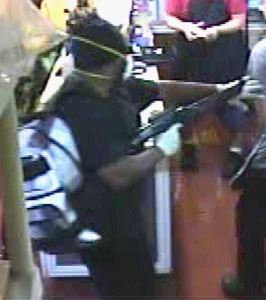 Officers responded to La Tapatia Mexican Restaurant, located at 208 W Rancier Ave., at 10:08pm on Friday, October 17, 2014, in reference to a robbery. Upon the officer’s arrival, they spoke with the employees who told them that a black male entered the business with a gun, pointed it at them and demanded money. The suspect took an undisclosed amount of cash and then fled the restaurant in a dark colored SUV. The suspect was described as a black male about 5’6″ to 5’8” tall and weighing 180-200 pounds with a husky build. He wore a black knit cap, sunglasses, and a white construction mask over his face, a black short sleeve shirt, dark or black jeans and brown shoes. The suspect was also wearing white latex gloves and was carrying a white and black backpack. 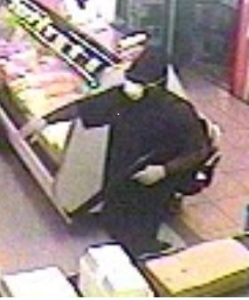 The following night, Saturday, October 18, 2014, officers responded to Choice BBQ, located at 2606 E Veterans Memorial Blvd., at 8:47pm, in reference to a robbery. The employees told the officers that a black male came in, pointed a gun at them and demanded money. The suspect then exited the business with an unknown amount of cash. The suspect in this robbery was described as a