Killeen Police responded to the 3900 block of Tatonka Dr. in Killeen, TX after the owner of a 2007 Mitsubishi Eclipse found their car burglarized just after 9:00am on Tuesday, October 1, 2013.  When officers arrived they were told by the owner that their wallet was taken during the burglary.  The victim also advised when they called to cancel their credit/debit card, they were told that it had already been used at the Copperas Cove Walmart.

Video footage was obtained showing three black males in their late teens or early twenties using the debit/credit card to purchase items at the Copperas Cove Walmart at approximately 5:24am on Tuesday, October 1, 2013. 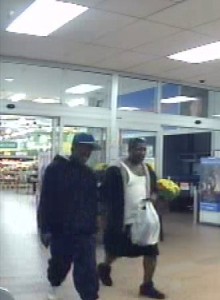 Detectives are asking anyone who can identify the suspects in the video or has information about the burglary of a vehicle or credit card abuse.  If so they are asked to contact Crime Stoppers at 526-TIPS (8477) or go online anonymously at www.bellcountycrimestoppers.com or text BELLCO anonymously along with the tip to 274637.  Text HELP to 274637 for help with the tip or text STOP to 274637 to stop the tip.  Message or Data rates may apply.  All information is confidential and you can remain anonymous.  If your tip results in the arrest of the suspects responsible for this crime you could be eligible for a reward up to $1,000 in cash.