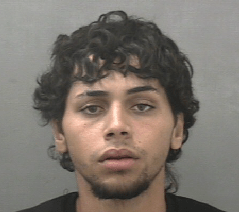 Officers responded to the Golden Corral located at 1420 E. Central Texas Expressway at 10:15pm, after receiving an alarm and a 911 call telling them the business had just been robbed.   Upon the officers arrival they met with the manager who told them a Hispanic male had just robbed him at gunpoint.

The manager told officers that he was walking an employee out into the parking lot when he saw a former employee in the parking lot. The three began to talk until the current employee left. The former employee then showed the manager a handgun and forced him back inside the business. Once inside he forced the manager back to the office and made him open the safe. Another employee was inside the office at the time and he had her lay down onto the floor. The suspect then tied up the manager and employee using cords from the surveillance equipment and fled in one of the employee’s vehicle; that vehicle was later found abandoned in the 2900 block of Illinois.

The detectives had this case reviewed by the Bell County District Attorney’s Office and a complaint was returned charging Orlando Enrique Fleischlauer, also known as Orlando Pabon-Fleischauer, with Aggravated Robbery. A warrant was issued by Justice of the Peace Garland Potvin for his arrest.

Do you have information on this suspect? Bell County Crime Stoppers will pay cash for information that leads to the arrest of person(s) responsible for this crime.