Killeen Police are asking for the community’s help identifying a suspect in a Burglary of a Vehicle and Debit Card Abuse case. 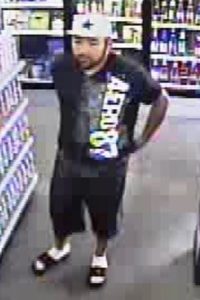 Officers filed a report, on Wednesday, May 18, 2016, for a burglary of a vehicle that occurred on Sunday, May 14, 2016 in the 200 block of Carter Street. The victim told the officer they noticed several personal items missing from inside their vehicle, including their debit card which was used to make several unauthorized transactions at different stores and restaurants in Killeen.

During the course of the investigation, detectives were able to obtain photographs of the suspect.

Detectives are asking anyone who may have information on this suspect to contact Crime Stoppers at 526-TIPS (8477) or go online anonymously at www.bellcountycrimestoppers.com.  You can also download the app P3tips on IOS and Android phones.  All information is anonymous and confidential and if your tip leads to the arrest of the person responsible for this crime you could be eligible for a reward up to $1,000 in cash.