The Killeen Police Department’s Public Affairs Officer, Carroll Smith, attended the 25th Annual Texas Crime Stoppers Conference this past week.  This conference was held in Corpus Christi on October 23 – 25, 2013 and hosted more than 350 attendees who are involved in Crime Stopper programs throughout the State of Texas.  On Thursday, October 24th, at the Texas Crime Stoppers Awards Banquet, Carroll received the prestigious award of Coordinator of the Year. 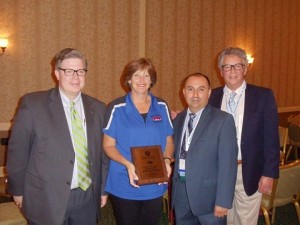 Carroll Smith is the law enforcement coordinator over the Bell County Crime Stoppers program.  This program has been in existence since November 1981.  The program was originated as the Killeen Crime Stoppers Inc. and was known as that for 30 years.   The Killeen Crime Stoppers program  has always worked with all the agencies in Bell County and  in 2012 it was decided that the program would go under an assumed name which is now known as the BELL COUNTY CRIME STOPPERS INC.  The program has not changed and is still a top notch program where it pays cash for clues to solve crimes that have been committed; all information is confidential and anonymous.  Since Killeen Crime Stoppers/Bell County Crime Stopper inception in 1981, there have been 2,925 cases cleared and 2,428 arrests made.  The program has given tipsters $249,900 in rewards for information that has solved crimes.  Departments have recovered $4,344,347 in property and seized drugs with a street value of $9,183,541 with a combined total of $13,527,888.  This alone shows that these program work and the more tips that are received means more bad guys in jail and justice for the victims of the crimes that were committed.